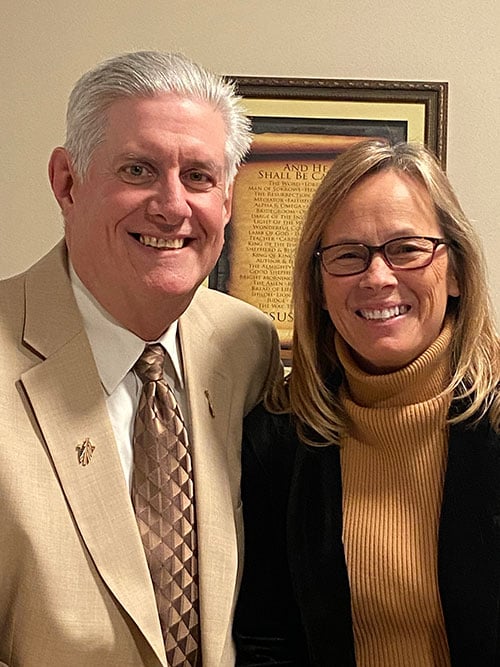 Brother Wade L. Prime was the pastor of Saving Grace Baptist Church for 22 years in upstate New York in a tiny little village called Fonda with only 800 residents. God blessed this church greatly with thousands of guests, hundreds of souls saved, and with high days of 250 in attendance. As a pastor of a fundamental independent Baptist Church in the northeast, Pastor Prime stood on the longevity and dependability of the old King James Bible, preaching the truths of God’s Word with conviction and a heart’s desire to fulfill the cause of Christ...“That all the people of the Earth may know that the Lord is God and that there is none else.” (1 Kings 8:60)

Coming from a normal childhood, at 13 years old Pastor Prime was burned extensively on his left leg leading him through many months of skin grafts and therapy while at the same time losing his mother to cancer. After a few years of rebellion and seeking meaning and direction for his life, he finally married his high school sweetheart Patricia Minch in 1977, which he affectionately calls the love of his life and attributes to learning the real meaning of love and loyalty. Together they have four beautiful children and 14 priceless precious grandchildren, one of which is now in heaven!

Pastor Prime played several sports in high school, which included football, basketball, and track. He represented some teams as their captain, and was blessed to be part of several team championships. Upon graduating from high school, brother Prime started

out his career in 1976 working on the railroad. When he was laid off in 1983 he started his own sign business,

which became very successful, growing into several properties and off shoot businesses. In the fall of 1987 he was saved and placed under the precious blood of Jesus.

In the year 1996 the call of God was upon his heart to surrender it all and enter into ministry; but letting go proved not to be that easy. Fighting the call of God, God began to fail his businesses. He finally gave up in 1998 and gave in and surrendered to God, deciding to join the journey with Jesus entering into full time ministry. Miraculously, God paid all his financial debts, set his feet upon the solid Rock of Jesus Christ; established his goings, and put a new song in his mouth. Psalms 40:2-3 He brought me up also out of an horrible pit, out of the miry clay, and set my feet upon a rock, and established my goings. And he hath put a new song in my mouth, even praise unto our God: many shall see it, and fear, and shall trust in the LORD.

Pastor Prime has a Master's degree in Theology and is now working on his Doctorate degree. Pastor Prime believes there is nothing too hard for God and nothing we cannot do when we have Christ. He believes that even though some things are not curable, changeable, or correctable, all things are conquerable thought a relationship with Jesus Christ. With a sincere love for lost souls and to see them saved for the Glory of God, Pastor Prime desires, and is pleading with God for a nation wide revival. His burden is the poor spiritual condition of our country, especially the Northeast.

Pastor Prime loves preaching the good news of Jesus Christ and teaching the Bible wherever he goes, whenever he can, to whomever will let him. His writings include a layman’s commentary on the book of Acts called “The Prevailing Church,” a new believers course called “Joining the Journey with Jesus,” a men’s discipleship manual called “Vessels of Honour,” a marriage counseling course called “Happily Ever After,” a parenting course called “Bless a Life,” a counseling course called “Mastering the Mind,” a prayer devotional called “Prayer Prompter,” a door to door booklet called “Peace Be Unto This House,” and many tracts associated with his “Let Him Know” ministry. He has a heart for missions, a loyalty to the local church, a love for pastors, a strong commitment to family, an enduring thankfulness for those who have served their country, a dedication to law enforcement, and a passion to see them all come to the saving knowledge of Jesus Christ.

He loves to help strengthen and teach God ordained marriages, between one man and one woman, how to overcome adversity, stay together, and live happily ever after. He believes in defending the voiceless rights of babies in the womb, who are unable to defend

themselves, and caring for and defending the multitudes of neglected children in the world which are abused for no fault of their own. His empathy is towards those who don’t give up and refuse to renounce their God by compromising their faith, even though are facing severe adversity.

His hobbies include traveling, collecting and distributing Bibles, riding his Harley Davidson, spending as much time as he can with his wife, being with his grandchildren whenever possible, and learning about and shooting firearms legally, safely and responsibly; believing in our 2nd amendment rights.